EDITOR’S NOTE.  Few things upset me more than hiding the truth regarding the 150,000-strong Greek minority in Eastern Ukraine.  Greek Foreign Minister Mr. Dendias visited Ukraine a few months ago and pretended to have discussed support for them with the wrong people, the Government in Kyiv.  But then he had no choice: After the Mitsotakis government decided to send weapons to Ukraine (instead of just sending humanitarian aid), Mr. Dendias had no leverage to talk to the Russians about the Greeks of Donbas.  And how about the “concerned” Patriarch Bartholomew, and his upper Elpidophoros, who, every time Pat. Kirill of Moscow makes a statement, they start talking about anti-christian behavior… They totally ignore the Greeks of Donbas because they speak Russian and they belong to the Russian Church… They care more about the Uniates of Western Ukraine than their Greek brothers of Donbas… What a shame…

BELOW IS A REPORT BY THANASSIS ARGYRAKIS PUBLISHED IN NEWSBREAK.GR – IN ENGLISH AND IN THE ORIGINAL GREEK

Greek fighters on the Ukrainian front!

“I wouldn’t say that the Greeks here are with “Azov” and in favor of Kyiv. Here are thousands of us fighting alongside the Russian army. So let’s not talk about everyone. They should only talk about themselves.”

These are the words of the Azov Greek, Nikola Hart, from the village of Staragia Polyana, “Grek” (“Greek”), who in this way responds to the claims that the Azov Greeks have sided with Ukraine and are fighting today in the Ukrainian army. 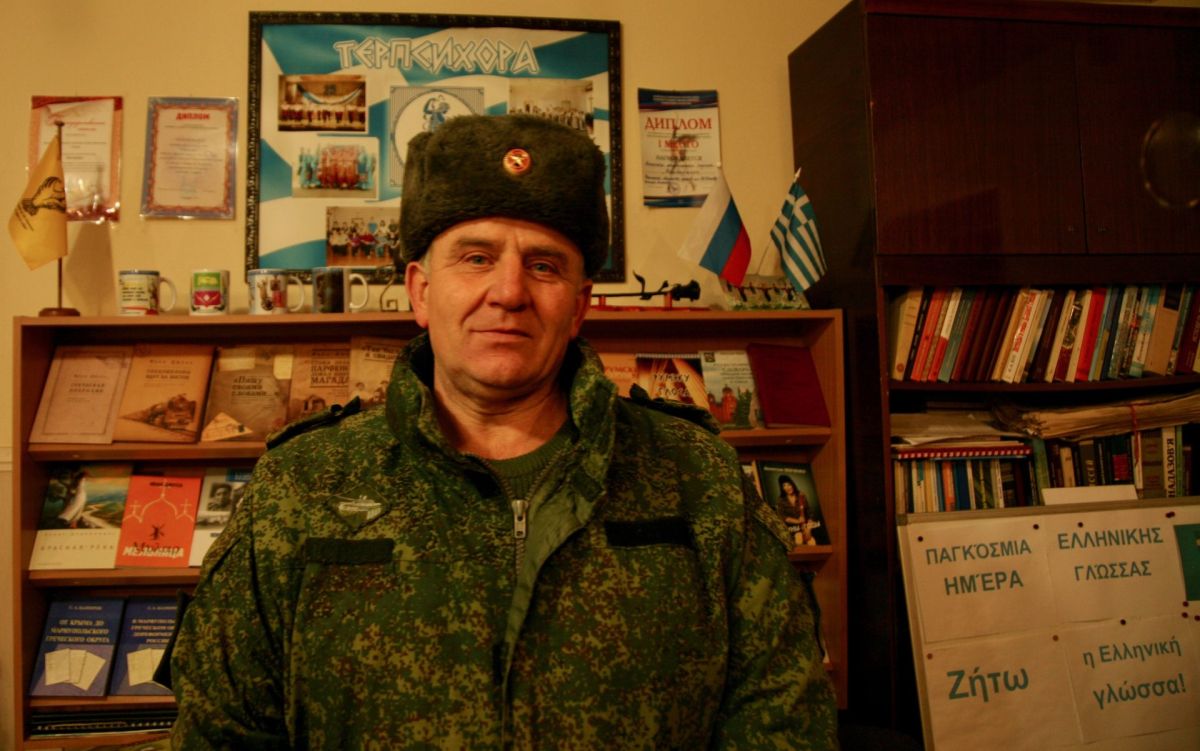 However, as he says, since 2014, he has chosen a camp. He was and is in favor of the independence of Eastern Ukraine, the wider region of Donbas. At the same time, today he holds the rank of captain and is an instructor of tanks in Donetsk, local conscripts and volunteers, who fight alongside the Russian army.

In Greece, the government and most of the media systematically cultivate the image that the Azov Greeks, a large part of Hellenism in the former Soviet Union, are on the side of Ukraine.

This image was attempted to be strengthened by the appearance, through a video call, of the member of the “Azov” battalion – extreme nationalist and with Nazi symbols – in the Greek Parliament. In April 2022, Michael from Mariupol spoke to the Greek Parliament after the president of Ukraine, Volodymyr Zelensky, who, in practice followed by most Parliaments in the West and the USA, spoke via video call. 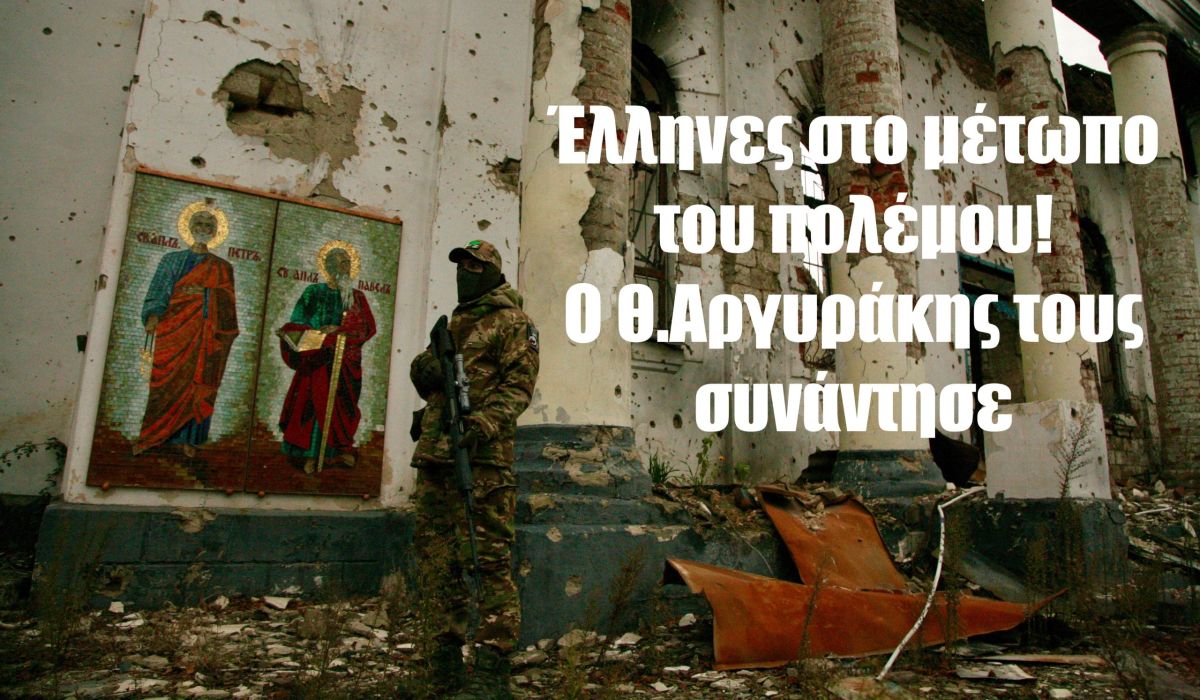 As Nikolas argued, Michael, who “may have been Greek, as Ukrainian prisoners told us, a few days after his appearance in the Parliament, was killed”.

Eight years in the slaughterhouse

However, the reality seems to be very different than all sorts of communication-propaganda narratives would like. The Greeks of the region, as well as the peoples of Ukraine, East, Central and South-East, who until a few years ago lived as brothers, are today divided and shedding their blood in a fratricidal war. In a slaughterhouse, literally a meat grinder. Both for them, and for them not! Therefore, embellishments and idealizations only serve to win one or the other side some points in the great international communication game.

However, the Greeks of Azov, who are estimated to number more than 150 thousand, have strong historical, cultural and linguistic ties with Russia. 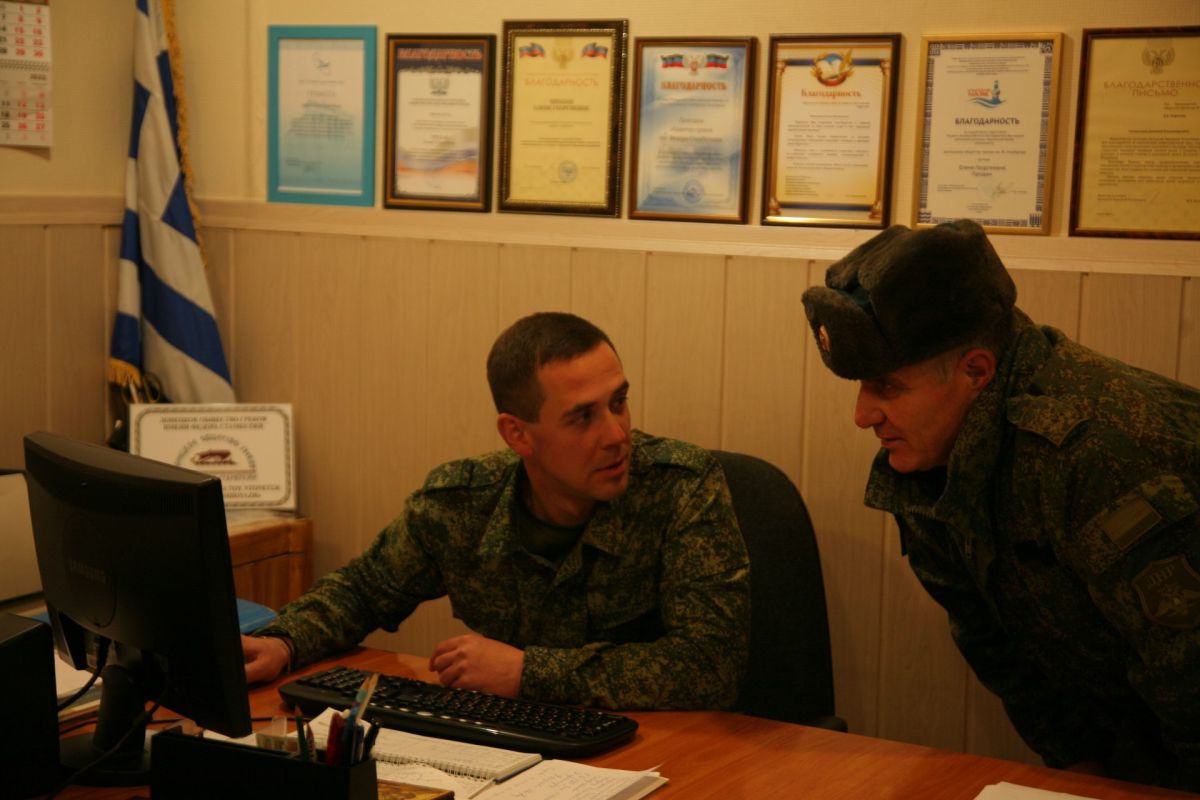 Dmitry Pifkeev, president of the Association of Greeks of Donetsk, also enlisted in the units fighting alongside the Russian army, is one of those who consider that the Greeks of the region feel closer to Russia than to Ukraine as it developed after 2014 with the rise and dominance, as he says, of Western-Ukrainian nationalism and the terrorism practiced by organizations that even bear Nazi symbols.

“Since 2014, many Greeks have joined the militias and continue to fight to this day,” he says. And he adds: “Several of them also took part in the battles in Mariupol. Not a few were injured. Others were also captured.”

The accounts of the Greeks themselves who take part in the war are chilling. Another has lost parts of his body and several are hospitalized with injuries, including Vania Arabatzi and many others. Someone who was captured by a Ukrainian unit, later, after being released in a Russian-Ukrainian prisoner exchange, happened to meet the Ukrainian who caught him and beat him. The Ukrainian had been captured by the Russians. Shocking, human stories of war, often between brothers separated by rivers of blood!

“We were born and raised here, this is our homeland,” continues Dmitry Pifkeev. “We have been speaking Russian since birth. I, until 2014, was a civil servant of Ukraine. However, I strongly disagree with the nationalist ideology of Kiev and the Nazi symbolism used.

“Now some are complaining because, as they say, Russia attacked Ukraine. But no one questions why. For eight years, after 2014, here in Donbass they bombard us. Have they heard of it over there in the West? How much patience, then, will Russia show?”

Dmitri Pifkeev, during the day, can be found on the streets, in uniform and Kalashnikov, doing street checks or wherever else his military service sends him. At night, often, at the offices of the Association of Greeks in Donetsk. In the largest city of the Donbass region, which, however, has turned into a vast front – advanced outpost. A city that has been deserted, since it lives – essentially – without water and is bombed every day.

All this, as well as the tense atmosphere of the last eight years, explains Dmitry Pifkeev, has resulted in “many of the Greeks leaving the city”. Like, after all, a very large part of the rest of its population.

According to the estimates of the local Greeks, since 2014, when – and with the blessings of the USA – the political unrest in Ukraine began, resulting in the war and the secession of Eastern Ukraine, and especially after the war that started on February 24, 2022, a significant part of the Greeks left the area. Until things calm down. Although eight years now, they are anything but quiet.

Like many citizens in Donbass (Donetsk and Lugansk provinces), mainly children and women, left for Russia. Especially in Southern Russia, Rostov province, where they have relatives or in search of work and better luck. Also, in Greece, as well as in other Western countries. Where anyone could. Uprooting!

Respondents, however, at the first opportunity, would like to return to their place. Just like the Greeks.

Along with the Chechens

In the other city of the Donbas region, north of Donetsk, in Lugansk, the Greek presence is also significant. In practice, according to what the Greeks of Donbas claim, there is no military unit of the local militia that does not have Greek women in its ranks. 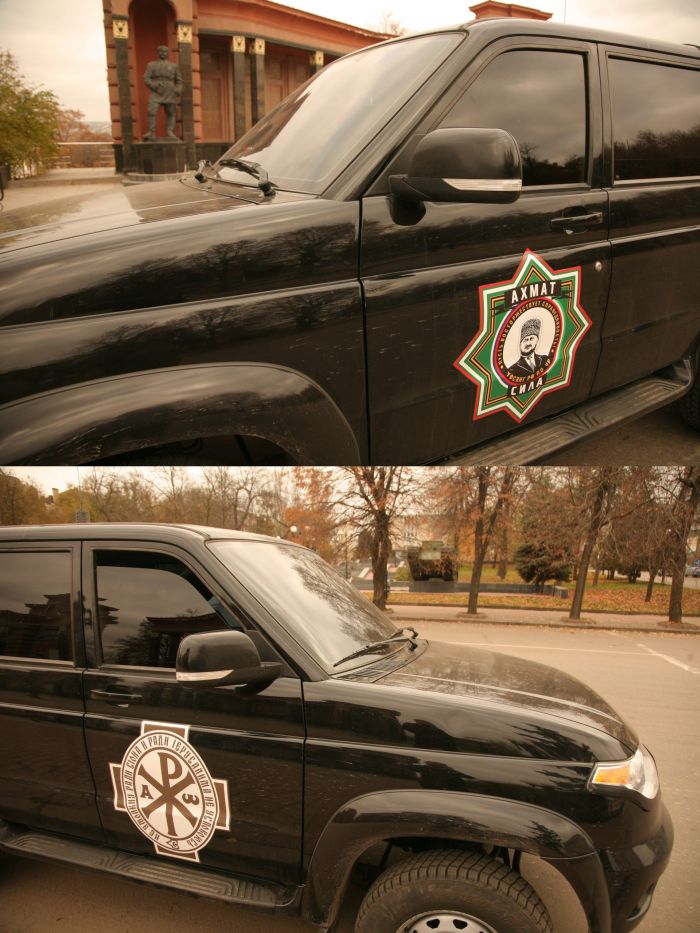 In the case of Lugansk province, the following interest is observed: Greeks have joined the Chechen unit, “Ahmat”. As is known, the well-trained and equipped units that the Chechen president, Akhmat Kadyrov, who is an ally of Moscow, has sent and continues to send since the beginning of the war, have played a decisive role in military developments in all theaters of the war. From Mariupol to Donetsk and Lugansk.

Popular News WSJ ridicules Ursula’s claims of seizing Russian funds
In recent months in the Donbass, Kadyrov has sent his Lugansk-based deputy leader, Apty Alaudinov, as a “deputy”. The interesting thing is that No. 2 in Alaudinov’s unit is a Greek from Greece.

He wanted to keep his anonymity and limited himself to appearing in the Greek media only with his nickname, “Grek” (“Greek”). And this despite the fact that he is known to the local actors of Lugansk and his identity is not hidden, since he has also made some public appearances. 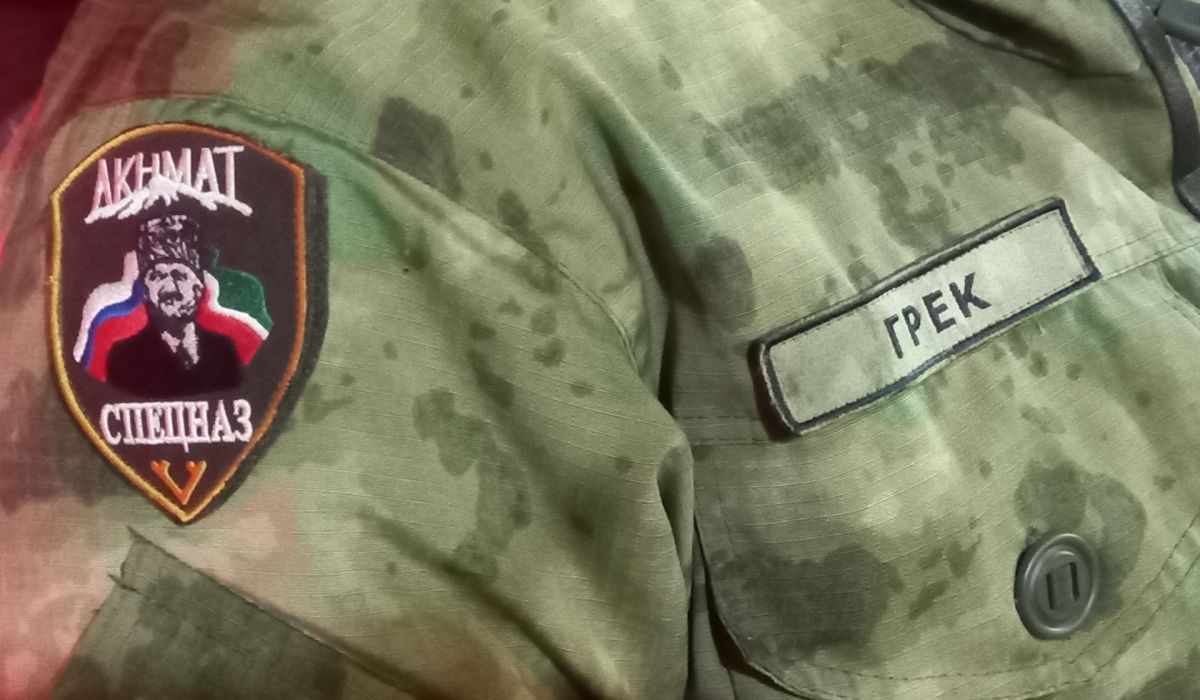 As is well known, the appearance of the Chechens in the war in Ukraine was compounded by a multitude of Western critical attacks, which, neither more nor less, presented them as the “alien Muslims” who came to “slaughter” the “Ukrainian Christians”.

Essentially, the image was cultivated that connoted ISIS “Islamist atrocities” in the Middle East, especially in Syria and Iraq. It should be noted, however, that in Syria the most combative units of the Russian army that clashed with the jihadists were the Chechens.

The “army of Jesus”!

Recently, in fact, Apty Alaudinov, in an attempt to give the feeling of a “crusade” against the “infidels of the West”, characterized the units being formed as the “army of Jesus”! A narrative that aims to convince that everyone together, regardless of religion and national origin, is primarily fighting the West and not Ukraine.

It is interesting, in fact, that in the symbol of the specific unit, “Ahmat”, the Christian symbol was added to Kadyrov’s symbol. “I will not be silent for Zion’s sake and for Jerusalem’s sake I will not be still,” is the inscription around the symbol of Christianity. A phrase used by the Russian “Orthodox Imperial Society of Palestine”, which has developed particularly intense international activity.

In fact, says the so-called “Greek”, especially in the area of ​​the front towards Kharkiv (north-eastern Ukraine), large forces, consisting of many thousands of foreigners, are concentrated. Poles, Hungarians, and others from many Western countries, but also Chechens opposed to Kadyrov, Georgians, etc.

They are, as he claims, holding this front line and not so much the Ukrainians. According to the “Greek”, in fact, the number of Westerners fighting in Ukraine is spectacularly large. A fact, however, which, as he says, is systematically hushed up in the Western media. 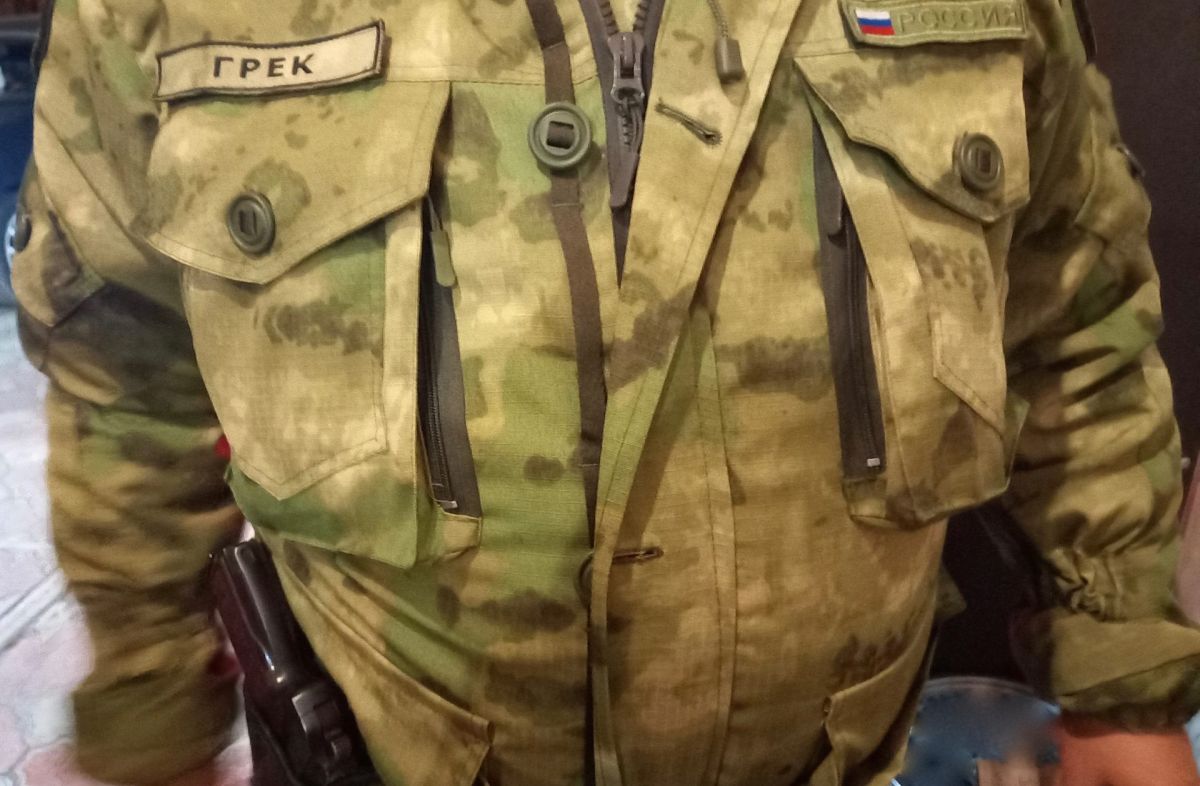 It should be noted that the Russian propaganda machine recently leaked information, according to which a unit consisting of Turkish “Grey Wolves” has been formed in Ukraine, as well as other fighters from Turkic regions of the former Soviet Union, as well as Arabs.