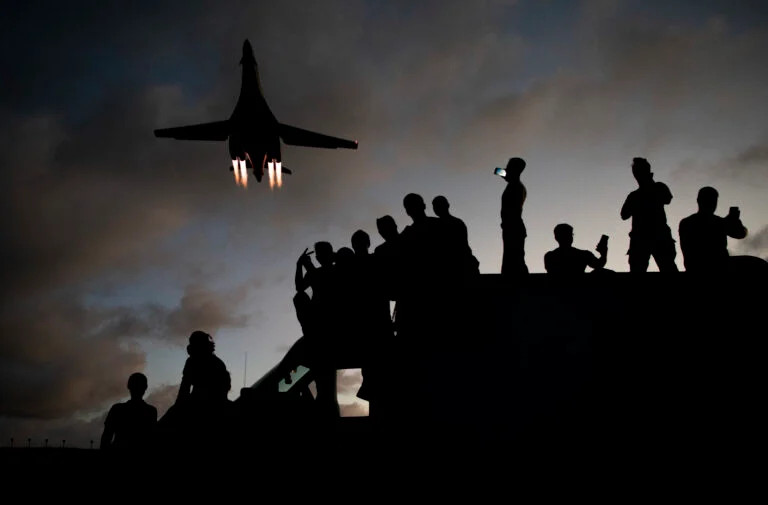 UPDATED TO INCLUDE STATEMENT FROM AFGSC.

WASHINGTON: Around the same time China was announcing a 6.6% defense spending increase on Thursday, civilian aircraft trackers spotted a US B-1B bomber flying dark (refusing to answer calls from civilian airliners) over the waters near the Kamchatka Peninsula in the Russian Far East, not far from China and Japan — a rare move that could be a harbinger of things to come under DoD’s emerging strategy for the Indo-Pacific region that includes a new ‘dynamic deployment’ concept for bombers.

“This B-1 left from home base, got a great training mission, and showed its capability for a 29-hour round-trip into the super-busy airspace around Japan where Chinese and Russian fighters routinely buzz the borders,” said Rebecca Grant, head of IRIS Independent Research. 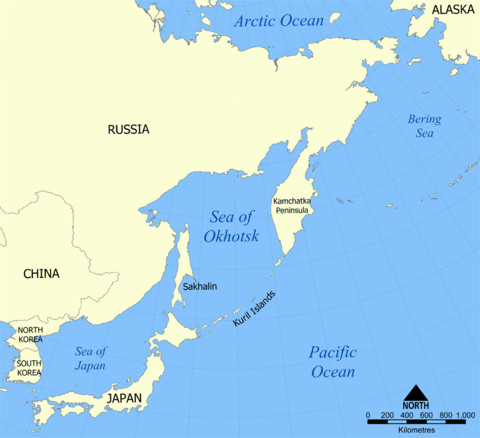 “China, Russia and North Korea all took notice,” she added. “It’s unpredictability with a purpose: the B-1 flight shows bombers can dagger into that airspace anytime packing precision weapons. In my opinion, we’ll see more of these dynamic missions because they amp up readiness for the crews, and deliver a show of force for Indo-Pacom.”

The Chinese defense spending increase, while impressive at first glance, appears to be the lowest increase in almost 30 years, Reuters reports. It’s a clear indicator of how hard the COVID-19 epidemic has struck the PRC’s economy. The US bomber maneuvers came as the USS Theodore Roosevelt returned to sea from Guam after being crippled for two months by a COVID-19 outbreak aboard ship. The latest presence mission comes amid reports that Chinese fighters have been flying close intercepts of US aircraft in the region over the last few weeks. And it’s a clear reflection of the newly-issued US strategic approach to the PRC.

“We acknowledge and respond in kind to Beijing’s transactional approach with timely incentives and costs, or 9 credible threats thereof,” a new White House document released this week said. “When quiet diplomacy proves futile, the United States will increase public pressure on the PRC government and take action to protect United States interests by leveraging proportional costs when necessary.”

“It is another example of how long-range bomber presence missions can demonstrate our nation’s willingness and ability to meet its security commitments, including the USAF’s unmatched ability to strike on night one of a conflict anywhere on the face of the Earth,” Mark Gunzinger of the Air Force Association said in an email. “It also emphasizes the B-1B fleet will remain a vital element of our warfighting force well into the future.”

While the Air Force has discontinued its round-the-clock basing of bombers in Guam, it’s new approach involves flying bombers in and out of the region with “unpredictability” designed to demonstrate to China and Russia the service’s ability to respond quickly to any provocation of regional allies. The mission was first reported on Twitter by a Japanese aircraft spotter going by the handle of @KimagureGolf9. The bomber with the call sign Dodge01 entered the sea from from the North Pacific Ocean, taking a round near the Kuril Islands chain that is administrated by the Moscow.

DODGE01 turns off the radio or doesn't seem to be heard Tokyo’s calling.🤔

“Global missions demonstrate our force remains credible, flexible and responsive and has the ability to project power, even during the pandemic,” said Lt. Col. David Faggard, spokesperson for Air Force Global Strike Command, in a statement to Breaking D this afternoon.

At the same time, Pacific Air Forces Command today issued a statement about an exercise sortie by two B-1B bombers in the region with a profile fitting the flight.

“In Alaska, the B-1s were joined by F-22s and F-16s out of the 3rd Wing at Joint Base Elmendorf-Richardson, to conduct a large force employment exercise in the Joint Pacific Alaska Range Complex. The crews then flew southwest to Japan where they completed familiarization training in support of U.S. European Command objectives. The bombers then continued south in the vicinity of Misawa, Japan integrating with the USS Ronald Reagan and a P-8 Poseidon to conduct Long Range Anti-Ship Missile training before returning to Guam.”

The B-1s involved in the exercise are currently deployed to Andersen from the 9th Expeditionary Bomb Squadron, 7th Bomb Wing, Dyess AFB in Texas as part of a joint INDOPACOM and Strategic Command (STRATCOM) “Bomber Task Force,” the press release added.

“These missions demonstrate our ability to hold any target at risk, anytime, and anywhere,” said Lt. Col. Ryan Stallsworth, 9th EBS commander. “The training value of these sorties is irreplaceable…our team conducted large force exercise training around Alaska with U.S. Air Force fighters, we conducted multiple standoff weapons training events, as well as integrated with U.S. naval assets along the way. From a readiness perspective, it is hard to think of a more valuable training sortie.”

Military overflights that skirt or briefly pass into an adversary’s airspace are venerable ‘signaling’  messages designed to demonstrate presence and readiness to rumble — if necessary. For example, Russian aircraft fairly routinely pass into the Alaskan Air Defense Identification Zone that extends some 200 miles off the Alaskan coast, where they are just as routinely intercepted and tailed by US and Canadian fighters.

However, such flights can also be seen by an adversary, or regional allies, as provocative. Asked by Breaking D about that potential, Gunzinger responded:

“I’ve traveled to Poland, Estonia, and Finland multiple times over the last few years, and none of our allies and friends expressed concern regarding U.S. presence missions in the region. Quite the opposite, in fact.”

Our bet is that Japan, South Korea, Vietnam, Singapore, Malaysia, Indonesia and the many Pacific island states share that view of the US mission in their area of operations. Japan is probably especially happy as the flight traversed the disputed Kurils, an island chain stretching north to the Kamchatka Peninsula. Russia sezied some of the islands after World War II.

Can a united front deal with China?