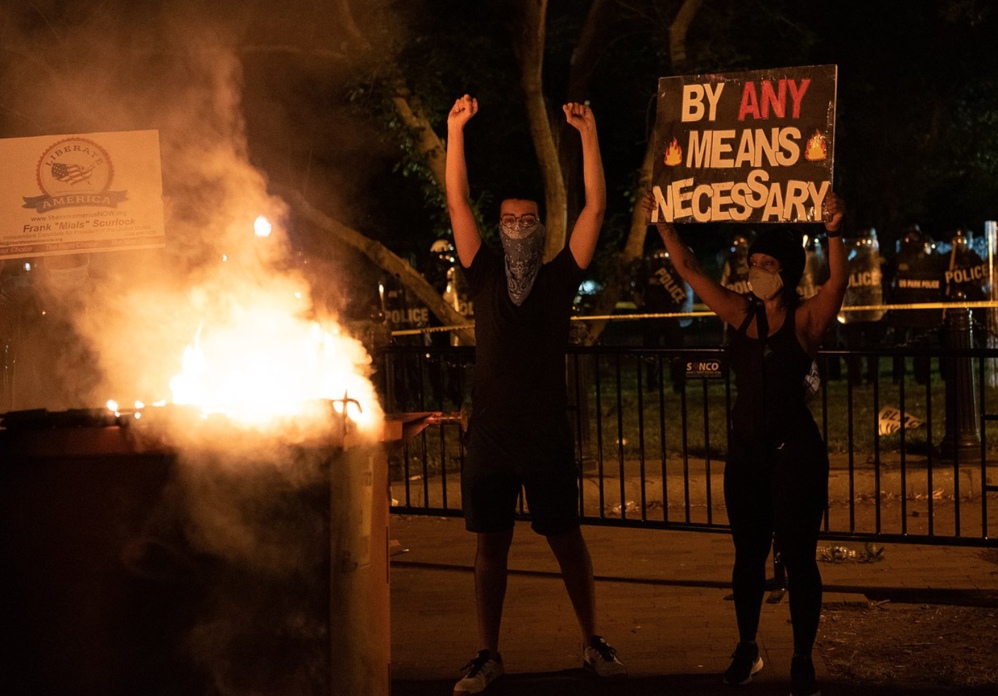 The hubs of insurgency are within our universities. To ensure the continuation of our way of life, they must be confronted.

Watching the “protesters” drive in groups in their SUVs to systematically loot and steal in Lower Manhattan was reminiscent of the London riots of 2011, a regime-change attempt after conservatives won in elections.

That month-long anarchy had its share of millionaire spawns with a penchant for thuggery. It also enjoyed tacit approval from left-wing politicians and sympathetic media portrayals by ideologues and lobby groups who blamed lawlessness on structural issues, regardless of the U.K. being one of the least discriminatory societies. That riot, too, received corporate backing, with performative intersectionality.

The author of the risible and flawed 1619 Project, now taught in more than 3,500 schools as compulsory history, predictably said the rampant looting is “symbolic taking.” Professor Steven Thrasher, chair of social justice at Northwestern University, wrote that burning and occupying a police precinct is a proportionate response.

Elsewhere, an “archaeologist” provided guidance and thematic sketches on how to topple obelisks in Washington, D.C., as they are symbols of systemic racism. A PBS reporter couldn’t find evidence of anarchists after weeklong anarchy. Taxpayer-funded AP provided style guidance not to call looters, looters.

All these responses were predicted, yet conservative leaders did nothing. Cops have been run over, old women beaten for trying to save their stores, and the state has responded incompetently. This is pure, rampant thuggery and looting, without regard for the common people who suffer from the anarchy.

This breakdown of order has roots in activist academia. While conservatives are belatedly waking up to the horror of organized anarchy by violent sociopaths taking advantage of unchecked social media, like the worst aspects of Arab Spring or Color Revolutions in East Europe, the talking points echo the exact things taught at universities. While the conservatives are busy focusing on the agents of destruction as the primary and understandably urgent problem, the deeper issues are the hubs of radicalism and those who plan and promote it.

What we are observing now is a rebellion against “normal,” as Helen Pluckrose and James Lindsay wrote in their latest book. This rebellion is founded on the idea that Western civilization is an evil that needs to be eradicated, leading to a coalition of people from different backgrounds, but with similar destructive aims. Postmodernist theories, they write, are a virus with a “practical aim that was absent before: to reconstruct society in the image of an ideology which came to refer to itself as ‘Social Justice.’”

They write, “[T]he new forms of Theory arose within postcolonialism, black feminism (a branch of feminism pioneered by African American scholars who focused as much on race as on gender), intersectional feminism, critical race (legal) Theory, and queer Theory, all of which sought to describe the world critically in order to change it.”

The result is a vicious power play. Bad scholarship is normalized and propagandized in mass media, and any criticism of such divisive ahistorical and unscholarly race-baiting is itself called racism.

“Social Justice scholarship advocates for ‘other ways of knowing,’ derived from Theoretical interpretations of deeply felt lived experience,” Pluckrose and Lindsay write. “It argues that reason and evidence-based knowledge are unfairly favored over tradition, folklore, interpretation, and emotion because of the power imbalances baked into them.”

From this angle, it all makes sense. Consider that most of our universities are led and funded by ideologues, teaching youngsters to revolt against the ruling order and burn it down. As Christina Hoff Sommers said, “The violence tonight is not about George Floyd. Growing numbers of young Americans have been taught to think of US as an evil empire—a white-supremacist, patriarchal hellscape. The part about the US being the best hope for humankind—a deeply flawed but noble democracy—not taught.”

These ideas obviously do not stay in universities, as anyone with half a brain knows by now. The 1619 Project normalization is just one example of the academic-media nexus working against the stability of the very system that led to its thriving. These ideas propagate and mutate into bible-truth.

The original assumption was that capitalism would cure kids as they got out of universities and faced the real world. It didn’t. The graduates, infected with neo-Marxism, took the theory to the real world. They didn’t just leave their ideological positions behind. They forged ahead to change everyone else, by force if necessary. From corporate boards to media, the powerful institutions that control both the money and narrative are now using the same rhetoric. Most of the people justifying anarchy as means of natural social justice are products of the same education system that led to this tinder box.

To Fight Radicalism, Go to the Source

Who benefits from this? One can see which politicians, academics, and journalists are tweeting and writing in support of this form of social justice. After the collapse of order, they can rebuild their utopian world where they are the rulers. They intend, as in Maoist theory, to heighten the contradiction, hurtling the country toward collapse and implosion from within. Their objective is to grab power, power that might not be won in elections. In so doing, they also destroy the liberal argument of state as the ultimate arbiter of safety and fairness. If the state forfeits the protection of property, it is no more a state.

For what it is worth, the conservative cities and communities were relatively safer than all the liberal mega-cities, all of them imploding, with the police either mowed down, overwhelmed, failing, or refusing to help. In New York City, Mayor Bill de Blasio’s daughter was arrested for protesting, and her father, who is responsible for the safety of his city, was quoted as being proud of his daughter’s actions.

In a Hobbesian state of nature, powerful animals take advantage of the weak. Humans are no different, which is why we form social contracts at the community and state levels to safeguard against predation. If states fail, people band together in communities to save themselves. That path, however, is tinged with enormous bloodshed, and people won’t forgive those conservatives who were weak on thuggery.

As in any insurgency, tackling the hubs of radicalization is of utmost importance. The Cold War wasn’t just won by balancing the Soviet Union militarily but also by being vigilant about radicalism within the West. World War II was not just won over by red-eyed men storming beaches, but also by destroying Goebbelsian propaganda.

The hubs of insurgency are within our universities. To ensure the continuation of our way of life, they must be confronted.

Sumantra Maitra is a doctoral researcher at the University of Nottingham, UK, and a senior contributor to The Federalist. His research is in great power-politics and neorealism. You can find him on Twitter @MrMaitra.
Πηγή: thefederalist.com
Previous Article

How The Right Pro-Growth Policies Can Restore The American Economy