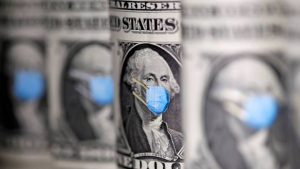 NEW YORK—The dollar recovered from a nine-week low on Thursday, lifted by a rise in U.S. Treasury yields after the government reported strong economic growth for the first quarter and an improvement in new jobless claims in the latest week.

Gross domestic product increased at a 6.4 percent annualized rate in the first quarter, the data showed, the second-fastest growth since the third quarter of 2003. First-quarter growth was powered by consumer spending, which increased at a 10.7 percent rate versus a 2.3 percent pace in the fourth quarter.

A separate report on Thursday showed U.S. initial claims for state unemployment benefits fell 13,000 to a seasonally adjusted 553,000 during the week ended April 24.

“Certainly a big part of the dollar’s move is the rise in yields today. There has been a pretty tight correlation between FX and rates,” said Erik Nelson, macro strategist at Wells Fargo Securities in New York.

“Everyone got complacent with the move lower in rates and the dollar got crushed in April. Now that yields are coming up and stabilizing a little bit, we are going to see some dollar strength,” he added.

In afternoon trading, the dollar index, a gauge of the greenback’s value against six currencies, rose 0.1 percent to 90.596. Earlier, the index hit its lowest level since Feb. 26. The earlier dip in the dollar also drove the euro to a nine-week high, though the single currency has since stabilized to around $1.2116, down 0.1 percent.

The Fed’s dovishness was in marked contrast to the Bank of Canada, which has already begun to taper its asset purchases, sending the U.S. dollar sliding to a three-year trough against the loonie. The greenback was last down 0.2 percent against the Canadian currency at C$1.2281.

The U.S. dollar also struggled overnight after President Joe Biden’s push for another $1.8 trillion in spending risked expanding the U.S. budget and trade deficits, a perennial Achilles heel for the greenback.

The yen, however, struggled against the dollar, still reeling after the Bank of Japan earlier this week said inflation will fail to reach its key 2 percent target through early 2023.

In the cryptocurrency market, ethereum, the second largest digital currency in terms of market capitalization, hit another record high on Thursday of $2,800.89. It was last down 0.7 percent at $2,732.09

Ethereum continues to garner institutional interest, especially with the explosion of decentralized finance, or DeFi, which are crypto platforms that facilitate lending outside of traditional banking institutions. These platforms are built on the ethereum blockchain.

By Gertrude Chavez-Dreyfuss and Kate Duguid

China is trying to break up the "five eyes" intelligence network